« How to deal with ISO 13485 in a software company? - How to develop medical device software with agile »


How to develop medical device software with agile methods? - Part 1

IEC 62304 is the standard to apply for software in medical devices. It is not bound to any software development method or model. Though not explicit, using the waterfall development model is the most straighforward way to apply this standard.
The waterfall model has become old fashioned to the eyes of most of software developers, with the emergence of agile methods. Agile methods are so popular now that everydody wonders how to apply IEC 62304 with agile methods.

An AAMI/CDV-1 TIR(SW1) - Guidance on the use of agile practices in the development of medical device software exists about this subject. But it is still a draft and only members of AAMI have access to it.

So, how to use agile methods and still be compliant with IEC 62304?
Here are my thoughts about these questionings!

This is a preliminary article in a series of three about agile methods.

A word to explain how I managed to reach a conclusion about dealing with agile methods. I start from the waterfall model, the de-facto standard, and derive it sequentially, until it looks like the agile methods. 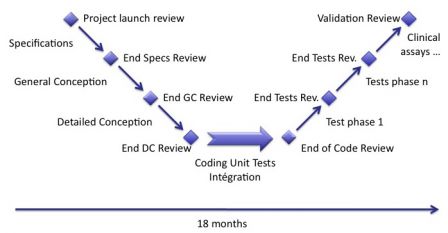 For example, we replace a cycle of 18 months by 3 cycles of 6 months each.

The percentage of user requirements completed increases during each cycle. We obtain 3 versions of software:

Let's add more cycles, by doubling the number of cycles in 18 months.
We have now 6 cycles of 3 months each.

The situation tends to become difficult to manage. The burden created by the repetition of iterations becomes to high (excepted if you have plenty of time/money and people dedicated to it):

A solution is to spend time of the first stage to software specifications, architecture design and (a bit of) detailed design. This first stage is consacred to the reflexion on the functions, the architecture and the design. Developers may (and will) write sketches of software but this remains a low percentage of activity.
The SRS, STP, SAD and SDD should be almost 100% finished at the end of the first stage.

Then the iterations begin, of 3 months each. They stem from the results of the first stage to implement sequentially the software requirements in each iteration and the tests cases. So only the SDD and the STD are updated at each iteration. Others documents should remain unchanged or be slightly changed to match the small changes in software requirements and design.
During the last stage, the whole software is verified, last bugs are fixed and the software is validated.
Again, as I said before, the whole software has to be tested when it is complete. You should spend time of the last stage only to re-test extensively the software. This is the only way to ensure that it is correctly verified.

Let's add even more cycles, during 18 months we do 36 iterations of 2 weeks. We absolutely don't have time to do the whole documentation of the waterfall process during each cycle. Keeping the first stage of reflexion and the last stage of testing, the iterations are shrinked to fit the timeline of the project.

This is like pushing the second iteration derivation to its limits. Nothing new here compared to the second derivation.
Again, the testing phases are mandatory in each iteration. Since there is no time left to retest everything in two weeks, only the software parts impacted by the coding of the current iteration should be tested at the end of the iteration, plus expected regressions.

Derivations but not agile

Is it possible to obtain copies of the powerpoint slides or visio diagrams for this article? I would like to re-use the digrams in a presentation.

Is it possible to obtain copies of the powerpoint slides or visio diagrams for this article? I would like to re-use the digrams in a presentation.

Hi there, I enjoy reading through your article post.
I wanted to write a little comment to support
you.

They posted on the same topic

From test driven development and specifications |

(…) There's an interesting series of blog posts (beginning here) I was reading in which agile methodologies for medical software is discussed. One solution (described as Agile (…)