« The concept of continuous certification: get rid - How to differenciate Bugs, Software Risks and »


How to differenciate Bugs, Software Risks and Software Failures - Part 1

Do you follow me?
If not, let me give you some more explanations.

Let's begin by the easiest concept: bugs.
With the prominence of digital appliances in our everyday life, everyone knows what a bug is:

More than one concept behind bugs

This simple concept encompasses several other concepts that software engineers have defined. It was necessary to do so because the way you solve the problems raised by each concept is different.

IEC 62304 introduces a process named Problems Resolution. The purpose of this process does fit the general concept of bug. It aims at analysing and solving any bug, any issue that happens with a software in a medical device.
Thus you should trigger the Problems Resolution process when you have to manage every concept described below.

While bug is a term used in everyday life, engineers - especially testers - prefer using the term: defect. And they prefer adding this precision of context: It's when it doesn't work in conditions where it's supposed to work. You did everything you were told, and it doesn't work! That's because:

Example (if by chance you needed one):
A pocket calculator, supposed to work with 10-digits numbers, that gives this result: 2+2=5 --> Bug
For sure there is an error in the program, or something was missed/forgotten.

IEC 62304 prefers using the term Anomaly. It is defined at the beginning of the document and is used many times in the standard. That means that IEC 62304 focuses a big part of the efforts to reduce the amount of anomalies that remains when a software is delivered to end-users.

Defects can be so numerous, diverse and annoying that software engineers have defined a lot of attributes to characterize and categorize them. A bit like entomologists do with real bugs.
A defect has a title and an explanation plus a bunch of criteria. The most used criteria are:

Other "administrative" criteria are also useful:

Some companies like to add a looong list of criteria in their databases to characterize defects. This is not very useful, as most of engineers only use a small set of them.

Severity, the most important criterion

Most of times, the severity is defined by values like:

Some engineers like to add the Cosmetic value, for very minor things. When a word is misspelled in the user interface, but the whole thing remains understandable, then that defect can be set as cosmetic.

In short, defects are deviations of software from the expected result. They are usually put in three categories: Critical, Major and Minor.
The diagram below, that I'm going to complete later on, represents the defects. 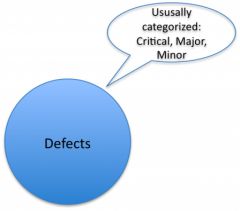 It's a defect.
If my 10-digits pocket calculator can't compute:

It's not a defect but a software failure. Input data are outside the expected range of value.

The battery of my thermometer is empty and it gives a wrong value. No, my patient is not in hypothermy!
In this case, the software failure comes from a hardware failure. It may (shall!) have been expected, with something like the flashing led of the battery state, telling me to charge it.

I entered a wrong value and I got a wrong result.
Probably the type of failure that is the most difficult to avoid.

But defects and failures are not so distinct concepts. There is a strong relationship between them.
When there is a defect that makes my software totally or partially unusable, a can say that my software fails! So, a defect can lead to a failure?
The answer is yes. But not for all defects:

In short, a critical or major defect can generate a software failure.
Minor or cosmetic defects don't.
Software failures can be generated by other types of root causes, like hardware failures or user errors. 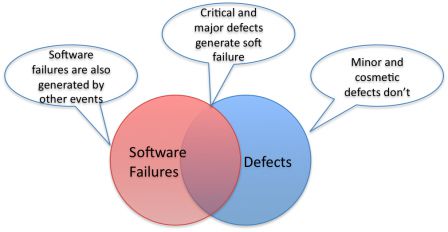 OK. But a minor defect that annoys a user, it sounds like a risk.
Talking about risks, are there software related risks that are neither defects, nor failures?

I'll explain this in the next article. It will deal with the risks and their relationship with defects and failures.

Amen for this immensely informative blog. Software bugs can be one of the most infuriating aspects of development. Not to mention the negative backlash that ensues when clients are unhappy. I cherished the level of detail you go into. Thanks again.