Is my software in class A, B or C? is the second most viewed page on this website, after the templates repository for software development process.

Thus it deserves an update to explain how the software safety class is assessed with IEC 62304 amendment 1.

IEC 62304:2006 defines in section 4.3 the software safety classes, based only on the consequence of a hazardous situation on the patient:

Another way of viewing this definition is to disregard the probability of risks linked to a software failure, and to focus only on the severity.

Here is an example of risk matrix:

Remark: don't take account of discussions about ISO 14971:2009 vs ISO 14971:2012 and risk acceptability criteria. The words unacceptable, tolerable and acceptable are here just examples to support the current discussion.

The software safety classes can be seen as areas on the risk matrix:

For example, a life sustaining medical device contains embedded software. The life sustaining functions are managed by plain old electronics. The embedded software is here to record and display informative data. But for some reason (this is just an example), a software failure could result in a hazardous situation for the patient that could lead to a serious injury. The probability of such situation is improbable (less that once is the device lifetime) and no mitigation outside this software system was identified.

With IEC 62304:2006 this embedded software is in class C, hence we have at least one risk of critical severity prior to software mitigation action where software failure is the hazardous phenomenon.

Although this risk has a high severity, the risk evaluation matrix of manufacturers usually deems a risk acceptable or tolerable for the cell (critical, improbable). Thus setting the software in the highest class doesn't match the acceptability of the risk prior to software mitigation action.

That's one reason for the amendment of IEC 62034:2006. Let's see what has changed in the amendment, in section 4.3 where software safety classes are defined.

The definitions of software safety classes were totally reworded:

These definitions are accompanied by a flowchart, which explains at a glance the selection of safety class. 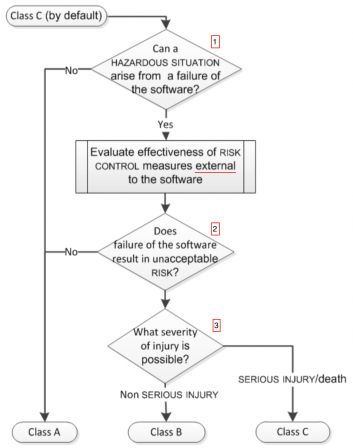 The questions can be mapped to the above definitions:

The consequence of these definitions is the introduction of the acceptability of risks in the assessment of software safety class:

Using the same legend as in the previous matrix, the software safety classes areas can be represented like this:

The class A region can be extended to the upper side of the matrix. This is possible thanks to the sentence in bold in the definition of class A written above. In our example, the cell (critical, improbable) sees its corresponding software safety class set to class A, hence the risk is acceptable.

The concept of level of concern defined by the FDA somewhat overrides the concept of safety class found in IEC 62304. The guidance which defines it, is still applicable and hasn't changed since 2005.
Worse, the guidance was reviewed by the FDA in 2015, upon the retrospective review process. There is no information on the FDA website stating that it should be modified after the changes of IEC 62304 Amd1.
The definition of level of concern remains as is since 2005, and is to some extent stricter than the IEC 62034 Amd1 2015 software safety classes.

IEC 62304 Amd1:2015 brings a major change to the definition of software safety classes. It will prevent manufacturers from classifying software in a high class, in contradiction with the results of the risk management process.

Thanks for the continuous information!.
Just a FYI, I think there is a typo in the consequence part; you refer to iec 62305 that should be probably be 62304

Hi Wally, thanks for your hint!

Thank you for this article! I find this manner of reducing risk quite surprising... how can the software manufacturer justify the existence of risk control measures external to his product? We obviously have no control over what backup methods to ensure patient safety are used in conjunction with our software. Can you please give an example of risk control measures external to the software?

You're probably talking about standalone software. In this case the mitigation action can be in another software, independent of the original software. E.g. a quality control check software can mitigate risks of corrupted data used in software processing these data. This is often used in genetic data analysis.

Other kind of mitigation actions are protocols of use of software. E.g. users shall not use software alone and compare its results with other means, like clinical data obtained from another medical device.