Probability of occurence of a software failure

We've seen in those previous articles that the criticity of a risk is strongly linked to:

The probability of the injury is the combination of the probabilities of events that lead to the injury, including the software failure. 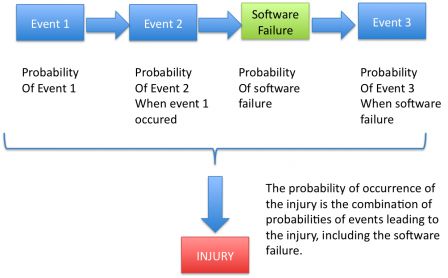 When the cause of the software failure is a defect, the diagrams changes to this:

Zooming on the first diagram above, we miss a serious piece of the puzzle:

It's all the more difficult to evaluate the probability of defects. Hence defects are human errors in coding and pitfalls in tests. With bugs, the only thing that we can say is:

By the way, IEC 62304 standard helps us to assert this. This is the main purpose of the standard! Better software development process, deeper risks assessment, better software, less bugs, less software failures!

Controlled process or not, we can't know the probability of a defect. Like with software failures, we miss a master piece of the puzzle:

If you don't know, take the worst case

The situation is not desperate though. There is a very simple measure to take. If we don't know the probability, we should take the worst case. It means that a software failure will happen one day. Somewhere. Somehow.
Thus the probability of occurence of a software failure should be set to 1.
There is an interesting discussion about that in section 4.4.3 of IEC/TR 80002-1. I invite you to read it.
So our green boxes on the diagram have a probability of 1.

It doesn't mean that the probability of risks where software is involved shall be set to 1. The final probability of a risk is the multiplication of:

Let me give you some examples.

A software reads data from a CD-ROM

I limit this example to one root cause and assume that there is not a chain of hazardous events to generate the hazardous situation.

A software fails to monitor a hardware

I give in this example a chain of two hazardous events which generate the hazardous situation.

What is the risk linked to a defect in the software.

This kind of situation is very different form examples given above, because the root cause is a pitfall in the design of the medical device. In short, the root cause is the software development team which missed something. I can't be more specific, hence there are thousands of reasons to have a defect. IMHO, this is the most difficult situation to grasp.
Why is it so difficult to understand it? Because we said that the probability of a software failure is 1. So, there will be a defect in the software, somewhere and it will generate a software failure one day, somewhere, somehow.

IEC 62304 reduces the probability of defects

Don't look too far how to manage this kind of software failure. The main mitigation action of risks linked to software failures generated by defects is applying the IEC 62304 standard!
The purpose of the standard is to decrease as sharply as possible the probability of having a defect:

Even if we apply IEC 62304 from A to Z, like in class C, there is still a very low probability that a defect occurs.
A software developed with class C contraints is very robust, but we can't assert it is perfect.

Situation #1 is the most comfortable. The software risk is mitigated by something outside software.
In situation #2, the risk remains. The benefit/risk balance has to be assessed with medical experts, to determine if the risk is acceptable.

We had the exact same discussion in one of our projects the other day. I usually read new posts on your blog, but I must have missed this one...

btw. I always recommend your blog to people I work with. It's often easier to get them to read this instead of looking into IEC/ISO documents =)

Thanks for the article.

Where you wrote "The main mitigation action of risks linked to software failures generated by defects is applying the IEC 62304 standard," I was wondering if "Software developed using IEC 62304" would be documented as the risk control on the hazard analysis.

It seems like this would end up being a risk control for all software-related hazards because all the software would be written to IEC 62304.

You're right :-) That's the purpose of IEC 62034. But ISO 14971 is there to force you to find mitigation actions specific to your software with top priority for "safety by design".