« En route to Software Verification: one goal, many - Lifi: the next generation of wireless »


En route to Software Verification: one goal, many methods - part 3

In my last post, I explained the benefits of static analysis. This software verification method is mainly relevant to find bugs in mission critical software. But it fits the need of bug-free software for less critical software as well.
Static analysis can be seen as an achievement in the implementation of software verification methods. Yet, other methods exists that fit very specific purposes.

In reference to my previous posts, I place the tests methods here in the Heavy Metal category!
Perhaps some may say these methods aren't so heavy metal. It depends on your experience with these methods, of course.

Automated Graphical User Interface testing sounds like something very simple, but it is not. It requires a GUI testing engine and a lot of patience of people who feed the engine with tests.
The main impact of GUI testing is on the composition of the test team. The GUI tests will certainly be assigned to a (poor) guy, who will work 100% on this task. A good option is to let him/her do other types of testing and integration!
I personally haven't been satisfied yet by any GUI testing tool I've found either open-source, or commercial. If you can quote me one that you're happy with, you're welcome!

Testing performance is less specific than testing GUI because it involves the whole architecture of a product, not only its GUI. As a consequence it involves the whole testing team (this is my experience, maybe not yours).
Here again, a lot of tools exist to do performance tests. Most of them are focused on Web apps or databases with concerns about load balancing and load increase.
This is probably not relevant for embarked software. Tailor-made testing programs are better to test a specific issue on such software.

Statistical methods are made to test complex algorithms. It is not possible to test all combinations of input values in complex algorithms. One way to increase the level of confidence in an algorithm is to use such methods.
Most of algorithms are based on physics/maths laws and can be tested to ensure that the law is verified by the algorithm.
Statistical tests call for techniques like Monte Carlo simulations or khi 2 tests, to name a few. Although I don't have experience in statistics, I had once to use a Monte Carlo simulation engine. It was a commercial add-on to excel, which was really nice to use.

To finish this series of posts, here is a diagram, which contains the position of the different verification methods we've seen. I tried to place them according to their complexity and the type of bugs found. 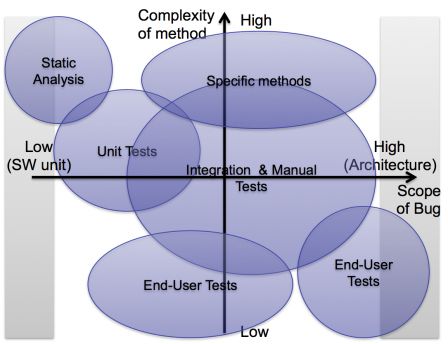 You may certainly change the size and the position of the ellipses, given your experience and the kind of medical devices your work on. And I don't include clinical trials in end-user tests done for software verification, as discussed in this article.

We have a zone at both extremities of the axis (grey-shadowed) where only one method is able to find bugs efficiently:

When these kind of bugs are found on the field, after the software validation:

Only a fully controlled software development process is able to whip out all bugs including those at the extremities of the diagram.

Some may say that I didn't mention code reviews by peers or code inspections (like Fagan analysis, as mentioned in a comment of this post). This is a kind of verification method, but no alive software is involved:

People only need a sheet of paper or a text editor to do code reviews. Code reviews are made by developers, not testers. That's why I didn't put them in the scope of this series.
One could argue that unit tests are made by developers. Yes, it's true. But units tests may be run by a tester or a build manager, without the help of any developer.
That's why I don't include code reviews in software verification, as well as requirements reviews or achitecture reviews, for example.

I tried to make an overview of software verification methods that exist and how complementary they are. There are probably other methods that are used by software companies or computer science labs. But I think that I have covered 90%-95% of all methods. If you know some others, feel free to quote them in comments!