IEC 82304-1 - latest news about the standard on Health Software

HEALTH SOFTWARE
software intended to be used specifically for maintaining or improving health of individual persons, or the delivery of care.

It is completed with the definition of health software product in the section 3.7 of the standard:

Types of software regarding the medical intended use

Thus IEC 82304-1 includes in its scope standalone software, which are not regulated as medical devices.

Types of software regarding the platform 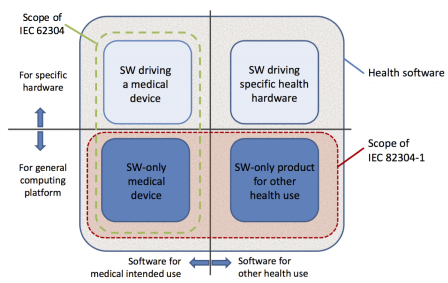 Note: the rectangle in green is not present in the graphic of the standard. It was added here for clarification to show the scope of IEC 62304.

Steps of the software lifecycle

IEC 82304-1 deals with standalone health software product. It defines requirements at the system/product level like:

Likewise, IEC 82304-1 defines requirements at system level for health software systems, and references a subset of IEC 62304 for the software lifecycle.
The graphic below sums up this. 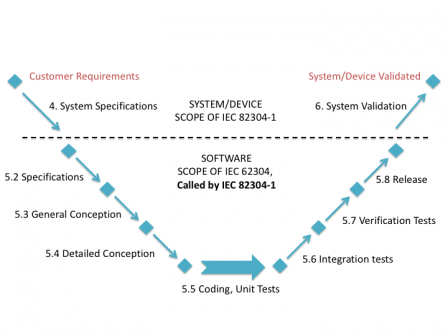 Relationships with other standards

Another way of putting this standard in the picture, it to draw the relationships of this standard with other standards, like we already did here for IEC 62304. 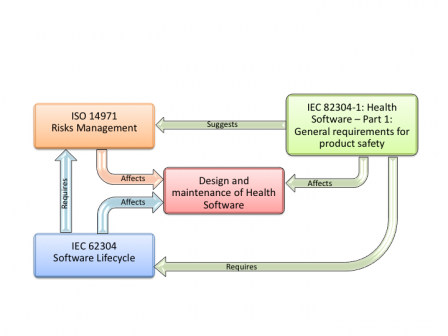 No. A standard is never mandatory, expected in very rare cases, but surely not for health software!

Not so long answer:

Standards are never mandatory but when they are recognized by regulation authorities, like the FDA, they become "gold standards" de facto.
So, for standalone software regulated as medical devices (eg. mobile medical apps), it could become recognized by the regulations authorities as soon as the final version is published. It would make it almost mandatory.
But for standalone software NOT regulated as medical devices, since they are out of the scope of regulations authorities, the manufacturers of such software could show very little willingness to implement IEC 82304-1!

Next time we'll see more in details the requirements of this standard.

Thanks for this really useful article. Just one tiny comment however, I notice there is a reference in it, to 80304 which I think should be 82304?

Thanks for your feedback.

Yes that what a typo, fixed.